“Load up on guns, bring your friends It’s fun to lose and to pretend. She’s over bored and self assured. Oh no, I know a dirty word.”

Those are the introductory lyrics to “Smells Like Teen Spirit”, off of Nirvana’s sophomore, acclaimed album, Nevermind, solidifying their stance as Grudge royalty, and propelling its frontman, Kurt Cobain, as its King. 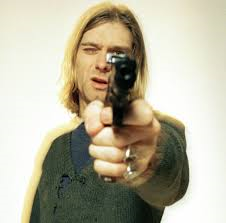 The music video, reading like a f*ck you statement to young adult conformity, set in a rundown auditorium, where an almost zombify cheerleading squad, with classic high school stereotypes, preps, stoners, slackers, wastoids, among others, scattered throughout in the bleachers, and flashes of a withered janitor, perhaps hearing the sound of the music, which in turns ignites his own nostalgia for a younger time but now long behind him. The sentiment in the song of true distain for tainting our youth with phony conventions, rang true then as it does today.

Their Songs, deeper, darker, probing, with perhaps an emphasis on examination of youth culture. Their Style, plain, worn, carefree. Their Attitude, much like their style, while throwing it all out there to be heard. This struck a cord with the music psyche at the time, when an infusion for something different was very much needed, with the more conventional sounds of rock and roll, needing an interjection, for a different kinda sound, style, and attitude, and through Nirvana, they certainly got it.

His own adolescence marred in early disillusionment, parents divorce, high school dropout, where a young Kurt struggled to find his place, seeking solace in the creation of those hard hitting sounds, that would become the impetus for his band, and a source of refuge for all he sought against and embraced in one cycle. It more than likely lent itself to not only the frustration of his own inner demons, tragically taking his own life in ’94 at only 27 (self inflected gunshot wound) but also spoke to that same generation he grew up in, known as GenXers.

For as Bleak as the band could get and the unfortunate demise of its leader, they posed questions, raised awareness, and above all, made us think, while at the same time delivering it to us in that aggressive sound, penetrating lyrics, aware, but smart enough to deliver it abrupt, in your face way, to emphasis their point, in the age of immediacy they knew to deliver it intensely and timely, to truly reach the masses of young people, speaking to their inner self, what was at their inner core, well, whatever, nevermind…