On my Millennial journey I was fortunate enough to recently speak to journalist and author Mary Daheim, whose Bed-And-Breakfast and Alpine Series have captured many mystery lover’s minds.

When I initially approach Mary to do an interview, she was with great humor and energy albeit a little hesitant, saying that she comes from The Silent Generation, therefore didn’t know what could contribute in terms of commentary on Millennials. 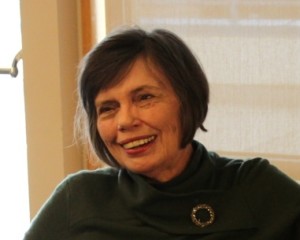 s then when I informed her, what really appeals to me is getting all takes and hearing from all people of various ages and generations to share in the conversation, which only fuels what Bottlerot is about, which is unity of the generation and beyond!

Sure enough (which I never doubted from her vibrant spirt) she contributed to the conversation and then some. We talked her generation, my generation, and her work in the process…

Did starting out as a journalist help inform your fiction and or writing?

Any kind of writing helps any other kind because a writer is always honing his/her craft. Working for a newspaper is a great discipline for a writer because there are deadlines and there are also space limitations, which means you have to give all the information but learn how to keep it brief and to the point.

What would you say are some of the main differences between your generation and Generation Y or my generation of Millennials?

I can only answer that by observing my three children who are all Millennials or Gen Y. They were born between 1966 and 1980. The obvious difference is that they are very quick to adapt to new technology. I am not. I consider the computer/laptop as a fancy typewriter with pictures and some information I can use for research.

In your opinion, does an Artists have any responsibility to society through their work?

The only responsibility that I have as a writer is to entertain my readers with my two mystery series. It was a bit different with my historical books. I did a ton of research and wanted to make the events, the settings and the real history as accurate as possible.

What do you make out of our ever evolving technology? (iphones, laptops, etc.).

I don’t have an iPhone, I do have an older model cell, but I rarely use it. I’ve never been on good terms with technology. When I was working for the phone co years ago in PR they introduced computers. The first—and only—time I tried to use the computer I blew out the entire system at 1600 Bell Plaza. Nobody there ever asked me to use a computer again.

What drew you to writing as a creative expression?

From your debut Love’s Pirate to your Bed & Breakfast series, Romance and Mystery seem to be the mainstay in your work, what draws you to these genres?

Romance novels never were my sort of thing. My first published book was originally written as a straight historical novel, but when I got an agent in New York, he told me the historical novels were out and romance was in. The solution, was to keep my original more or less intact and to add some sex scenes along the way. I wrote the first 85 pages of the B&B mystery on a whim. I was tired of writing historical romances (did 7 of them) and told my agent I wanted a change. He said NO, the money wasn’t in mystery, but in romance. On the sly, I managed to sneak those first 85 pages into an editor at Avon and was offered a 3-book contract two weeks later. Then I had to call my agent and tell him what I had done. After the first B&B book came out I heard from an editor I’d worked with earlier on who had now moved on to Ballantine/Random House. He wanted to know if I could write a second mystery series for him. I hadn’t thought about it, but suddenly I thought of the old abandoned logging town of Alpine where my parents and grandparents and other relatives had lived between 1916 and 1929 before the logging was finished and the town was shut down forever. The result of that series has been that Alpine is now on the state register of Historic Ghost Towns.

For Millennials, if you could impart any piece of advice, perhaps something that has always served you well from when you were starting out, what would it be?

Never take on a job you don’t like. I never did. And for writers, I quote Hemingway: The art of writing is applying the seat of the pants to the seat of the chair. In other words, you can’t wait for inspiration.

I want to personally thank Mary and encourage you to check out her website.